Our family loves camping and cycling, so what better activity than bike camping? The weekend of June 3 was Adventure Cycling’s National Bike Travel Weekend, so we figured it was a good time to try out our first bicycle touring adventure.

This was our first attempt at family bike camping and something that we had been talking about doing for over a year. It just sounded so overwhelming, we kept putting it off! As it turns out, not only was it totally doable, it was actually a lot easier than car camping due to the simplicity—you just can’t carry that much stuff on a bicycle. 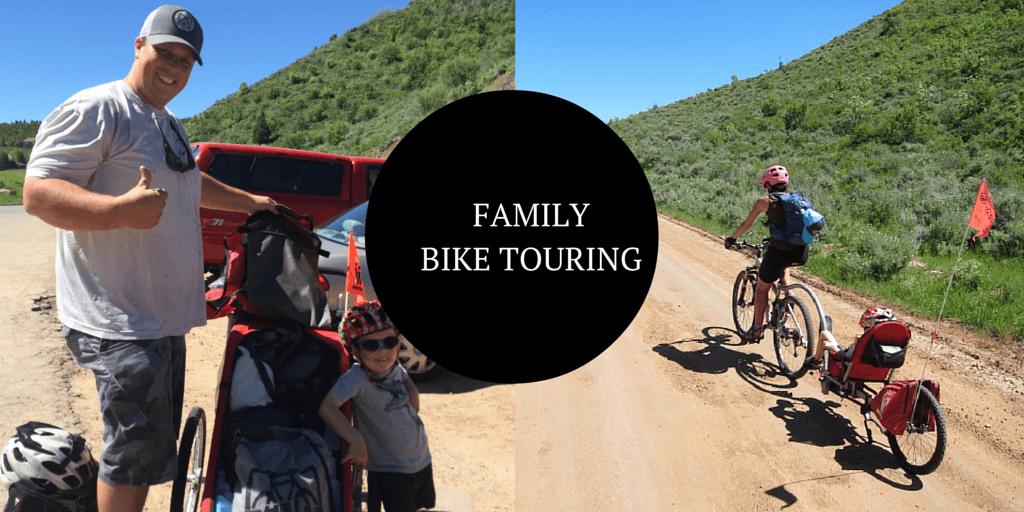 One of the reasons we had been putting off a trip was that we thought we were going to have to buy a lot of stuff. We don’t have frame bags and only a minimum of backpacking camp gear. It seemed like we would have to fork out a bunch of dough just to try it out. Also, going anywhere with a 3-year-old is a lot of work. What if our route took longer than expected or we had a bad mechanical? What if he cried and made our lives miserable?

Once we committed to a date (National Bike Travel weekend) for our first trip, we started figuring out how to make things happen. Instead of buying gear, we were just going to use what we had. This meant hauling the majority of our gear in our Thule Chariot Cougar 1 trailer. Of course, that meant singletrack was out of the question, so we chose a dirt road route instead. 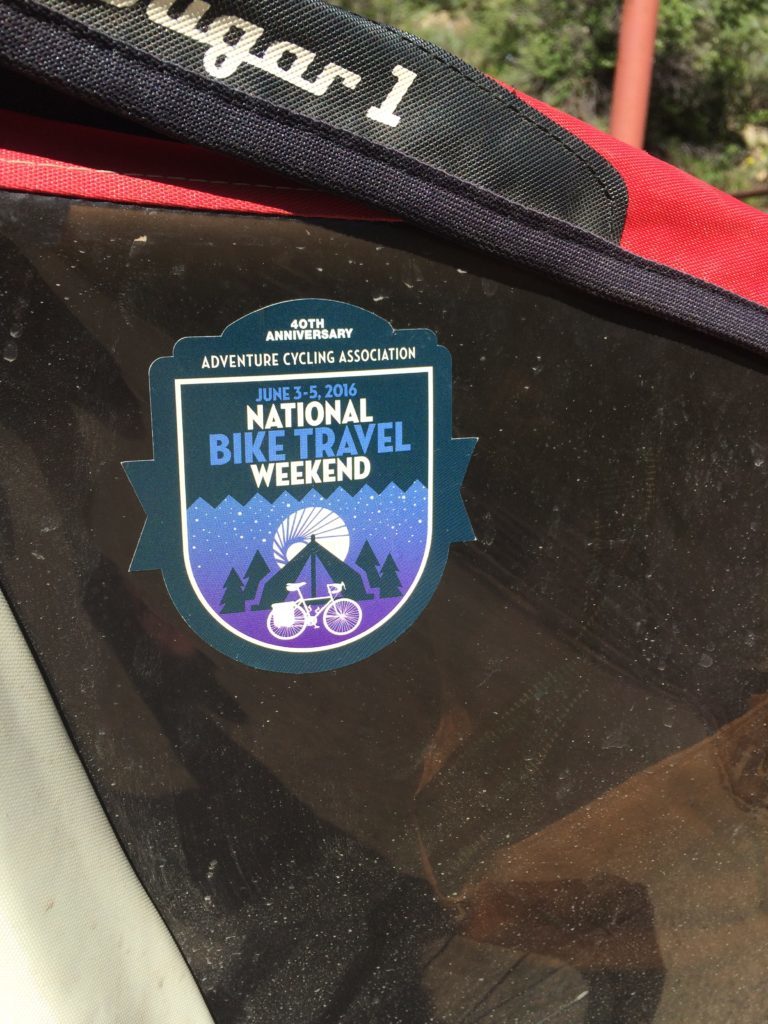 Blair mapped out a trip from Jeremy Ranch to East Canyon Reservoir. The distance was only 12 miles which seemed a little too short at home, but ended up being perfect for our first try at bike camping. The route was about 50/50 dirt road and pavement. The paved section was along the reservoir and had minimal traffic going both ways. The dirt road had almost no traffic, so was perfect for slow riding and family chit-chatting.

We started out later than expected Saturday morning. I slept in and then we had a lazy breakfast at home. We finally got started around 11am. Blair hauled the trailer and a rear rack bag that we borrowed from my mom. His load was pretty heavy, but it didn’t phase him at all. What a beast!

I hauled the kiddo in the Weehoo with minimal gear in the side panniers. Most of the time Blair has the Weehoo hooked up to his bike, so I haven’t ridden with it that much. It was a lot of fun, and Little P did a great job of pedaling with me.

We also made a few modifications to the Weehoo specifically for this trip. We added the kickstand accessory from Weehoo to it, and this was awesome! It allowed us to easily load and unload P and the gear from the Weehoo, and it helped keep everything upright when we made stops. This was helpful particularly when the kiddo fell asleep. 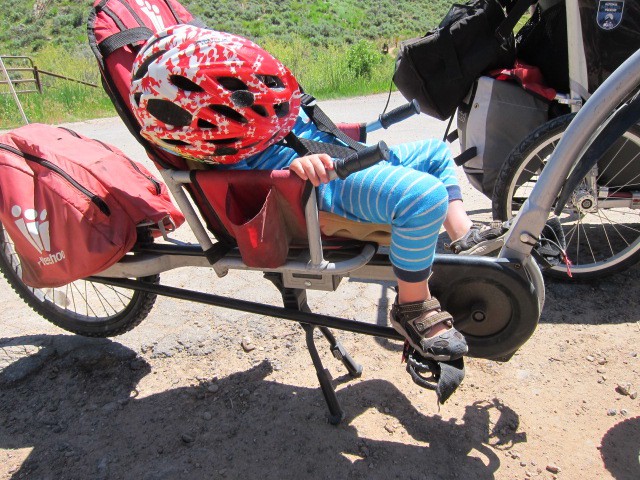 The other modification that we made was placing a strip of egg-carton foam to the seat. The dirt road we were riding was pretty bumpy so we wanted him to have a comfortable ride since the Weehoo doesn’t have any suspension. This seemed to work well, so we’ll probably try to make this a more permanent and more attractive modification going forward.

Because we were riding dirt as well as pavement, we took mountain bikes. I had my Specialized Epic and Blair took his old Gary Fisher commuter bike. Our set-ups ended up working perfectly and save a flat tire and a crank arm that kept coming loose (Blair), we didn’t have any problems.

Just a few miles into our ride, we stopped at Mormon Flat for a snack break. This is a beautiful riparian area that was a camp for both the Donner Party and Brigham Young’s crew as they forged a new route thru Little Emigration Canyon. Little P enjoyed crossing the bridge over the creek and exploring here. One thing that we’ve learned, is that when biking with a little person, the more play stops you can take the better the outing goes overall. 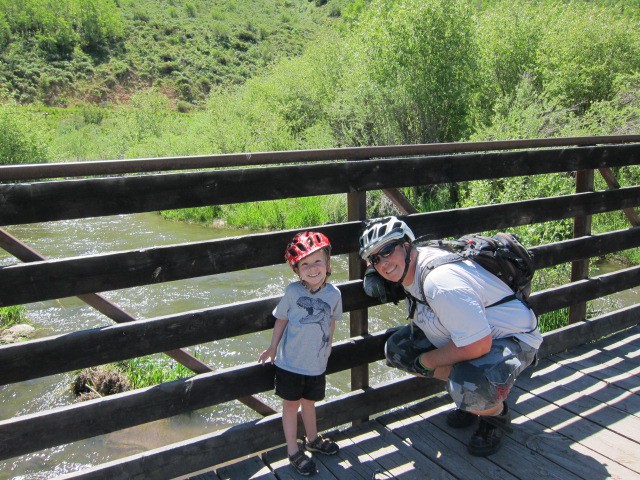 By the time we hit pavement, we were pretty much sold on this bike camping stuff. The route along the reservoir was super scenic and we saw a lot of road cyclists riding this section as well.

When we arrived at East Canyon Reservoir State Park, we checked in at the entry shack and told the girl working there that we had a campground reservation. She wasn’t quite sure what to do with us. Flustered, she prepared a tag for our “car” and then second guessed whether we needed it, and then finally gave it to us anyway. We ended up affixing it to the Weehoo.

Given our light load, it only took us a few minutes to set-up camp, and then we changed into our swimming suits. With temps nearing 90, we were all happy to dive right in. We spent most of the afternoon sunbathing on the dock and taking turns diving off. At the little concessions store, we bought ice cream and sat at a picnic table on the deck. 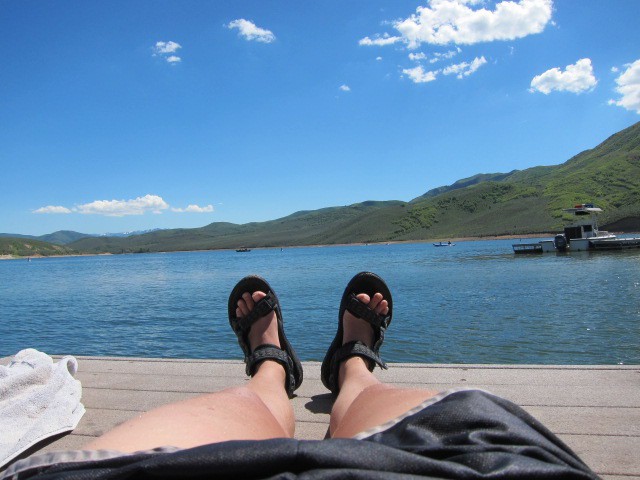 For dinner, we used our backpacking stove to boil water for our dehydrated backpacking meals. We shared Chili Mac, Chicken and Dumplings, and Mac and Cheese. Then we made a fire (we had bought wood from the lake store) and played Go Fish until it got cold. After our noisy neighbors quieted down, we were able to fall asleep. Our whole crew was exhausted from biking, sunshine, and water. 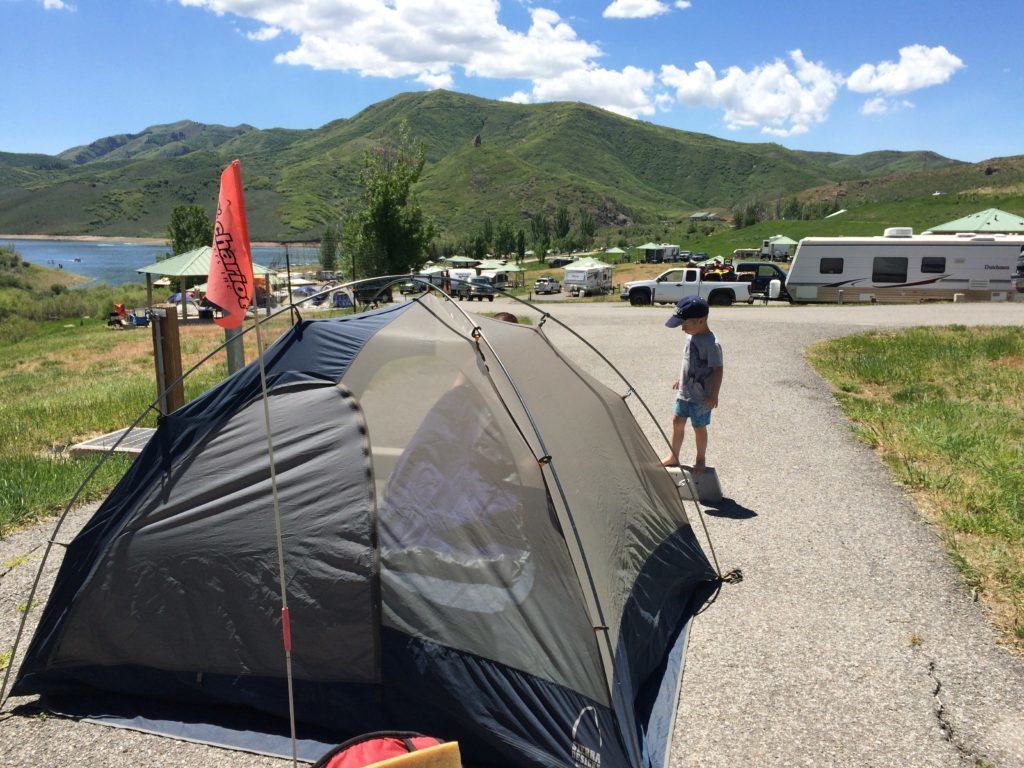 I woke up at 5:30am by Blair leaving the tent. He had forgone a sleeping bag for an air mattress and pillow, and the temperature had dipped well below the forecasted low. Nearly hypothermic, he headed for the showers, where he dethawed for over half an hour, and then came back to camp and started a fire.

Little P and I cuddled in the tent until the sun was fully up, and then we had tea and more backpacking meals for breakfast. We took our time waking up in camp, played more games of Go Fish, and then broke camp. Again, this was super easy as we just didn’t have that much stuff. So much better than car camping!

We biked down to the lake for one last dip and then hit the road toward home. A nice breeze was coming off the water, and the morning sun made the surface glow. This morning ride was super peaceful, and even P seemed happy to pedal silently along. 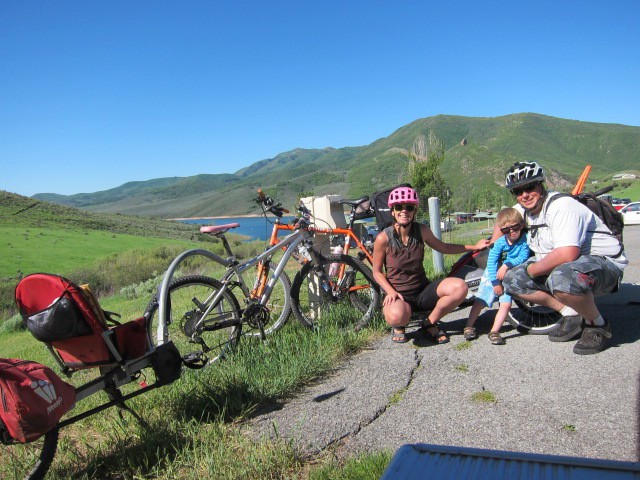 At East Canyon Resort, we stopped at the store for a mid-morning ice cream and coffee. I hadn’t had any coffee at camp, so I thoroughly enjoyed this! We sat on a bench and enjoyed ourselves, and by the time we left, I felt my soul had been sufficiently re-filled to survive the work week ahead.

The dirt road section was significantly more uphill on the way back and we finally noticed our loads. The temperature was around 90 by then, with little shade, so we were burning up as well. P was exhausted from our loud neighbors the night before, so announced he was going to take a nap, and promptly fell asleep. Blair and I finished out the ride mostly in silence, sweating up the hills with our respective loads behind us.

Back at the car, we were all hot, tired, dusty, but mostly REALLY HAPPY. Our experiment was successful, fun was had by all, and we were already planning our future trips.

Now that we know this kind of adventure is not only possible but also super fun, we are thinking about finally investing in frame bags and some better gear that would allow us to do some off-road  bikepacking. Maybe even a tandem with a stoker kit for Parker. Stay tuned for our future adventures!

Here’s what we ended up bringing along on our trip:

We weren’t really missing anything, and if we had wanted to go even lighter we could have. Some of this certainly wasn’t necessary (beer, pillow, etc), but it’s what we had room for and it worked for us on this particular trip.

My Tips for Bike Touring with Kids

Since this was our very first bike touring trip, I thought I would also see what other more experienced parents recommend. Here’s some of the best advice I found.

Bike camping is a perfect family activity. If you’ve ever had an interest, stop thinking about it and just do it. For your first trip, keep the route short and close to home and just use whatever gear you already have. If it’s something you end up loving, you’ll refine your setup for future trips.

1 thought on “Bicycle Touring with Kids: Our Family Bikepacking Experience”