For bike-loving families, Sea Otter 2018 was better than Disneyland. From the Danny Macaskill Drop and Roll Show, to the Buddy Pegs scavenger hunt, to the pump track in the Specialized kid zone, there was no shortage of entertainment for the under-18 crowd. In days leading up to this year’s Sea Otter, we saw plenty of articles coming out announcing that the show would be heavily focused on kids, but we didn’t fully believe it until we saw it.

Inside our campground (I use the word campground loosely–it was a paved parking lot overflowing with RVs and vans), the evening entertainment was a group of groms that flew (and I mean flew) off a set of jumps. The show was only one step below the Drop and Roll Show inside the venue. In a sense, kids WERE the show at the 2018 Sea Otter. 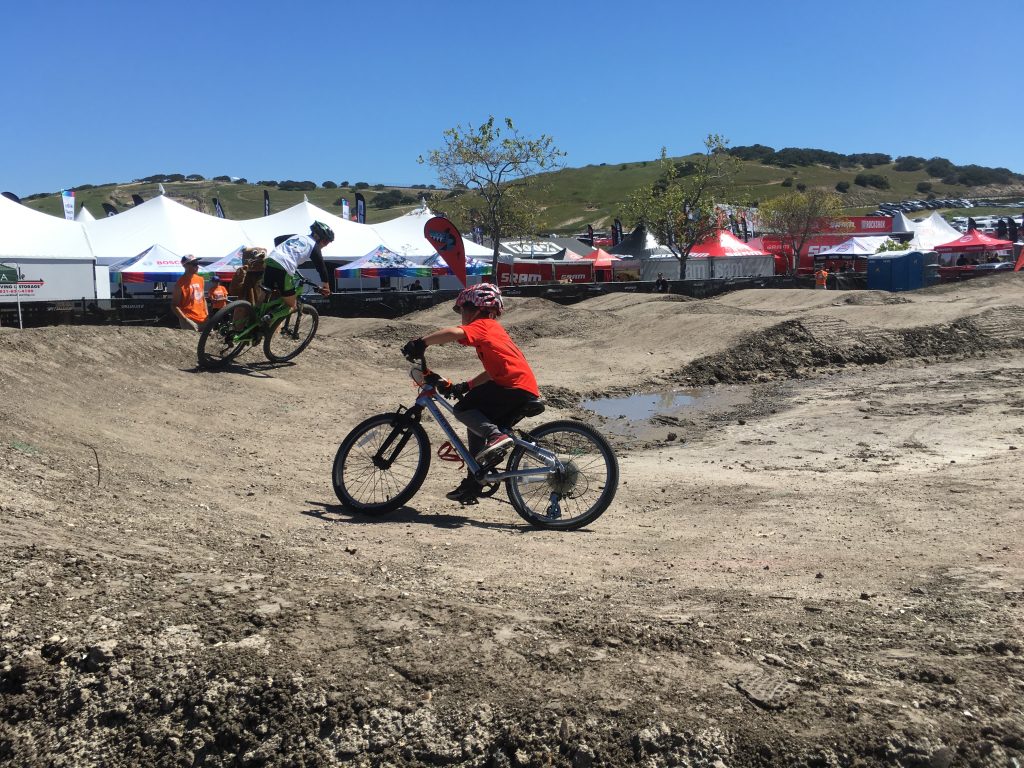 The number of kids bike companies in the expo was absolutely astounding. Woom, Prevelo, Cleary, Frog, Islabikes, Little Shredder, Trailcraft, Early Rider, and more were on hand to show off their well-made bicycles. Even amongst the big-name brands, many booths had kids bikes front and center, although most of their offerings were embarrassingly archaic compared to the kid-specific brands. (My son was dismayed by the lack of handbrakes, for instance, on the Specialized Hotrock he demoed on the pump track).

While we were expecting to see the bikes we’ve come to know and love from our favorite kids’ brands, we weren’t expecting to see so many new and exciting offerings from them. It seems that 2018 is going to continue to be an exciting year to be a kid. Here are some of our favorite things that we saw at Sea Otter.

The Prevelo Zulu line has been completely redone and expanded to include younger riders. As a mountain bike family, we were giddy to see such tiny bikes built for off-road riding. The Zulu Three and Zulu Four (which already existed), have been revamped and include a custom-built front-suspension fork. Even more exciting is the Zulu Two, a 16″ offering with suspension fork and Tektro disc brakes. The Zulu One does not have suspension, but is the only bike we know of that is this little that has disc brakes. Score one for the little rippers! 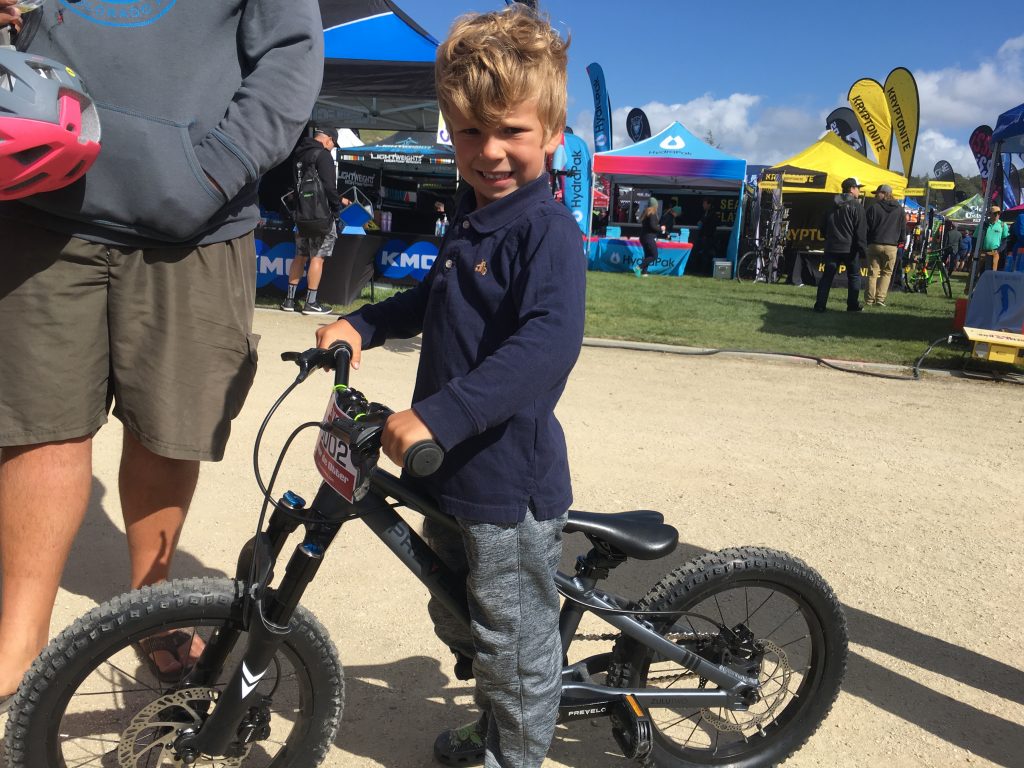 The bikes are not yet in production, and the Zulu One and Two were built up the evening before the show. They haven’t even hit a scale yet, and weight could end up being the limiting factor here, BUT Prevelo has been known for their lightweight bikes in the past so we’re hoping that’s the case here as well. We will anxiously await the release of these bikes which are expected to be delivered in late summer. 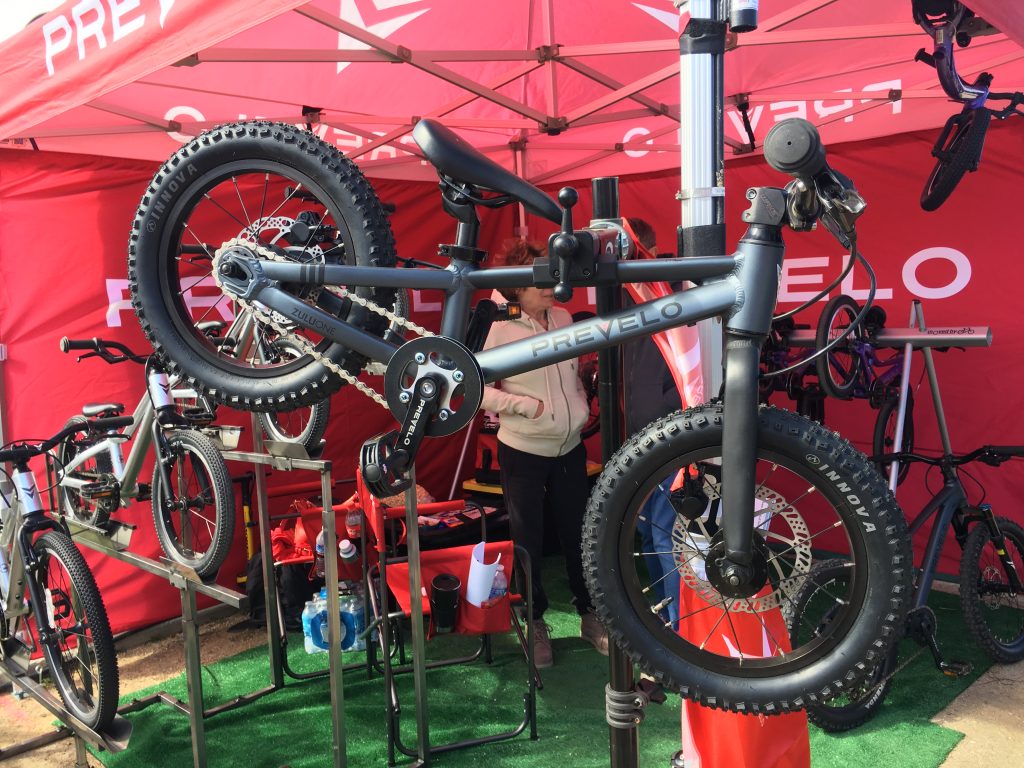 Woom already made one of our favorite balance bikes, and now they’ve added another. The Woom One Plus is a 14″ balance bike better suited to pre-schoolers than toddlers. It has dual handbrakes (color coded just like the Woom pedal bikes), and comes with a “surfboard.” The surfboard is a (removable) wooden footrest for kids to use while coasting. The surfboard will also be available as an after-market product that can easily be installed on existing Woom 1 balance bikes. 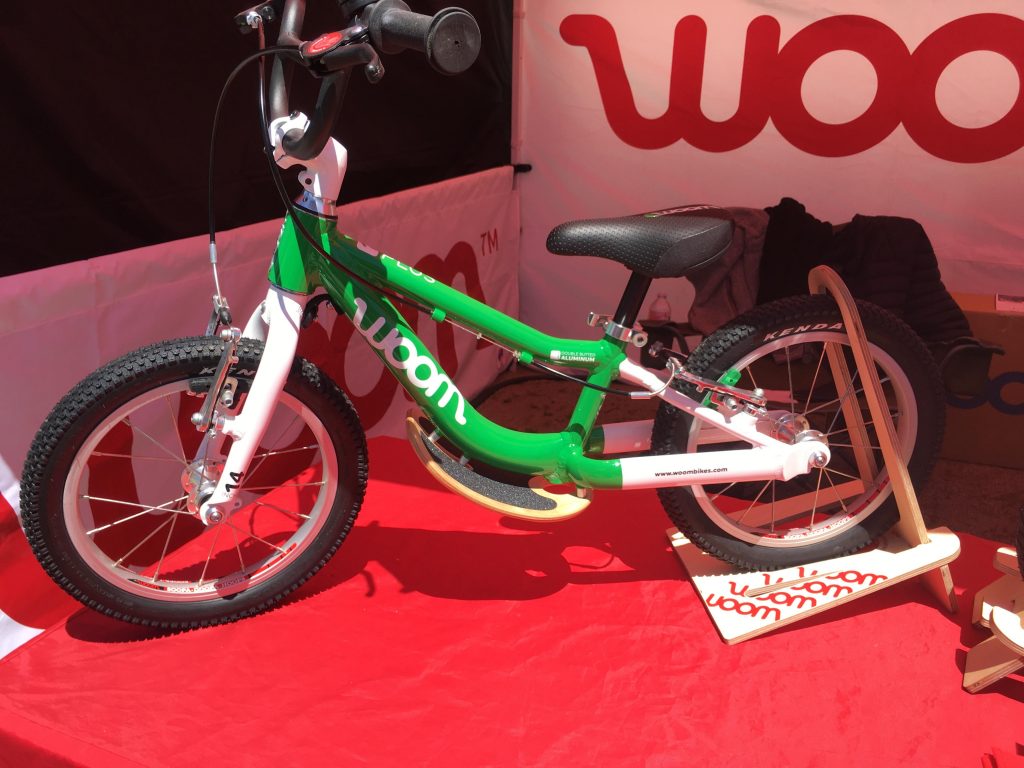 Also on display at Sea Otter was the new Woom helmet. We’ve been testing one for about a month now (review coming soon), and think its an awesome new helmet option especially for Woom bike owners. The helmets include a magnetic buckle, a “rubber-bumper” visor, and ample air vents. 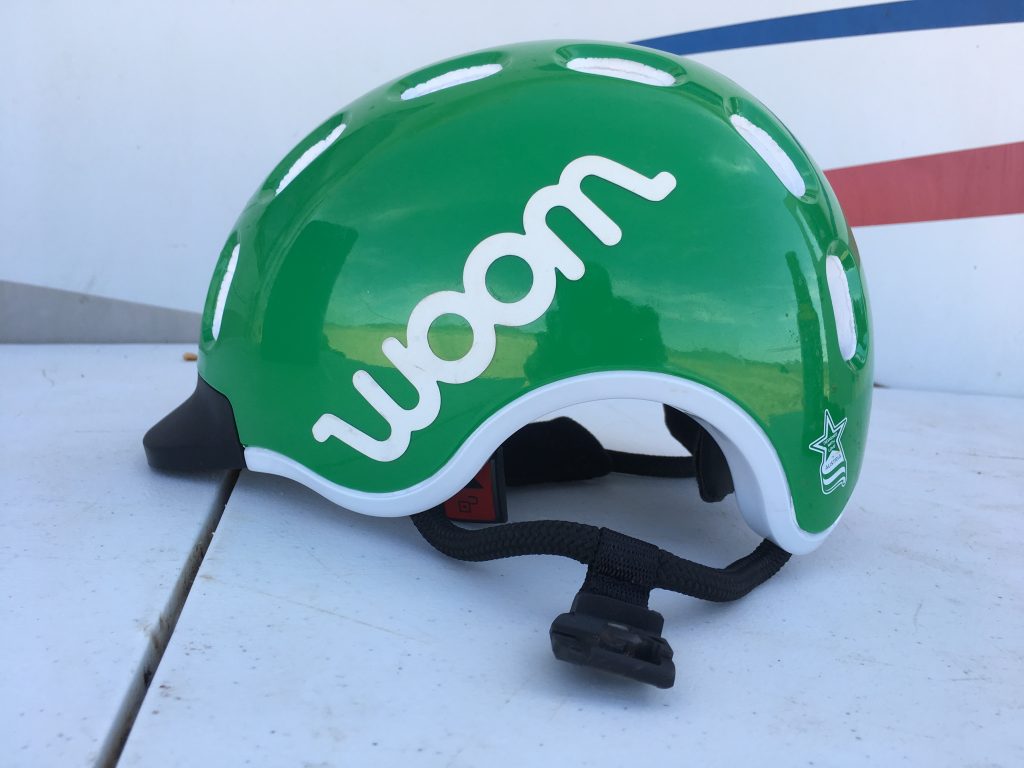 All these new Woom products should be available for pre-order in the coming weeks.

Cleary has made a huge splash in the kids’ bike world in the last few years, and with the announcement of their new Scout 24 and 26 mountain bikes, the company continues to make waves.  The Scout is beautiful with high-end components and tubeless compatible wheels.  At its price point, $840 and $860 respectively, the Scout will be tough to beat. 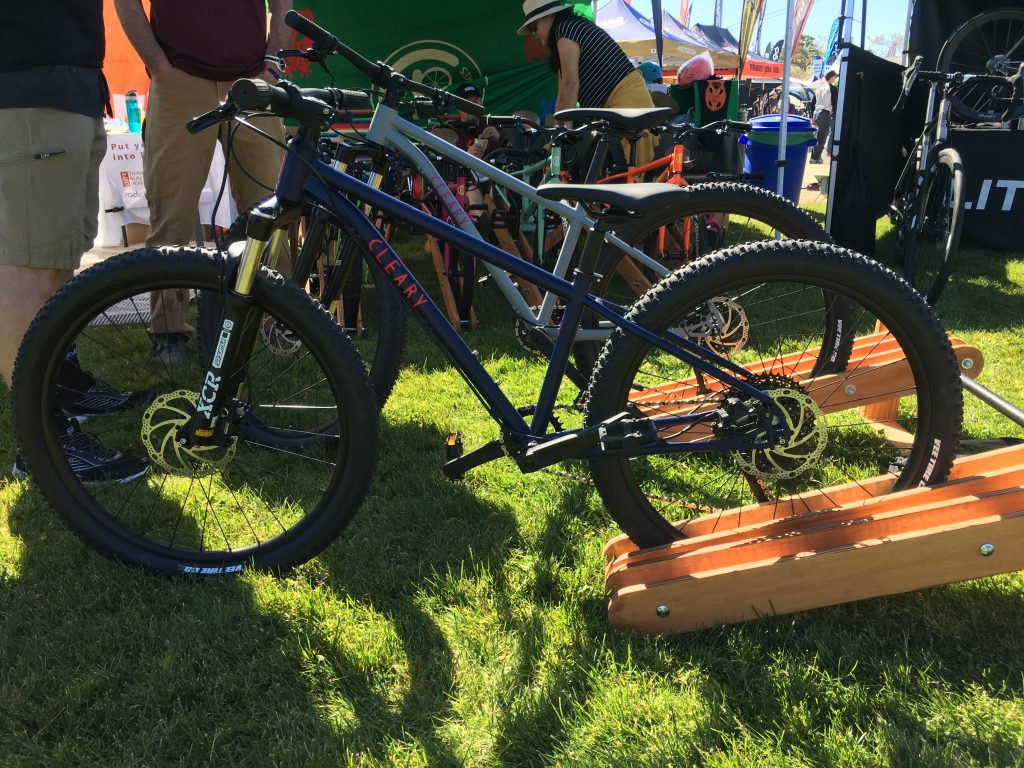 Like the Prevelo Zulu offerings, the Scout bikes are BRAND NEW and have yet to be weighed. The 24-inch version felt around 26 pounds (a respectable, though not featherlight weight), but we’ll have to wait and see what the final numbers are.  The Scout will come in 2 colors–Grey and Wicked Blue–and should be available in June.  A smaller version, the Scout 20, will be released early next year.

Announced only a few months ago, Frog’s “Push the Limits” line was on display at Sea Otter. The mountain bikes were solid, although the real stunner, in our opinion, was the 26″ Frog 78.  Although Frog is known for their bright and beautiful paint schemes, the 78 takes it a step further with bright neon paint. The bike seemed fresh, hip, and a great option for older riders interested in commuting and recreational riding. 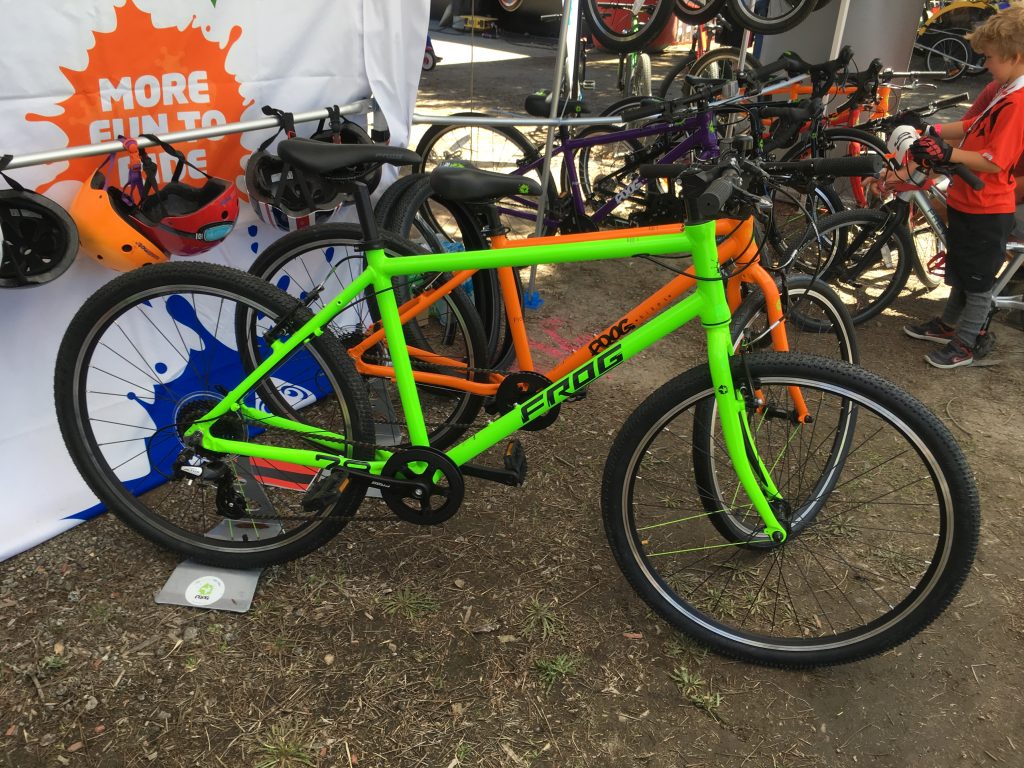 Frog also had their line of USA Cycling themed bikes on display. The USA Cycling partnership is one that was announced late last year, and both parties were doing a good job of advertising the union. These bikes will appeal to kids who are involved (or families are involved) in sanctioned racing.

Although we loved the Frog Bikes, we were even more excited when we were asked to sniff a pair of pedals. I was a little hesitant, but did it, and were surprised by the sweet, non-plastic smell. Turns out Frog is producing pedals made out of rice husks. The pedals will be added to their full line of bikes, and are not only environmentally responsible, they also have a nice wide profile that we appreciated. 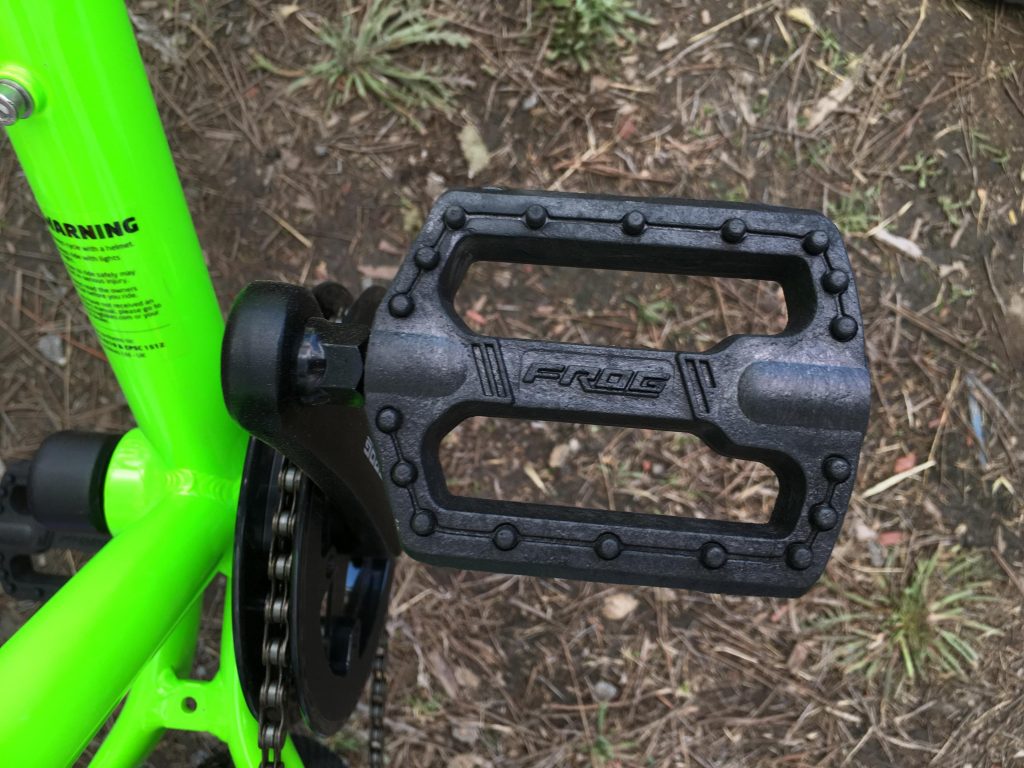 Lil Shredder had their gravity and trail-oriented bikes on display, and my 5-year-old hasn’t stopped begging for one since.  If your family takes mountain biking seriously, and you have some extra cash to spend, pay some serious attention to these bikes. 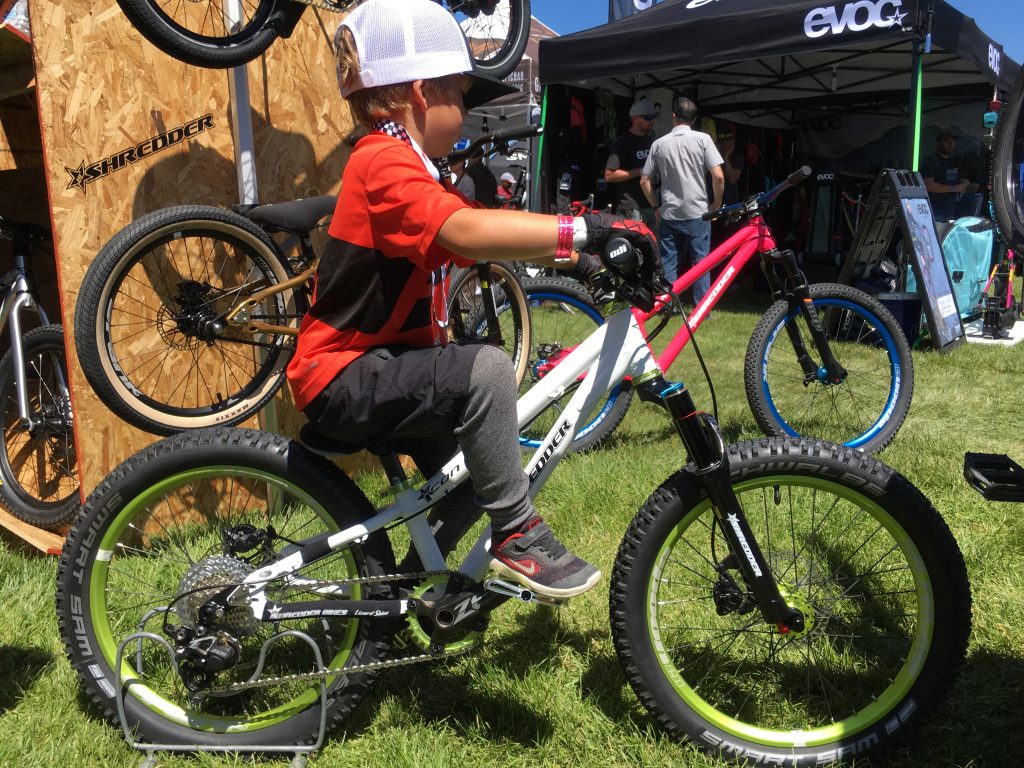 Islabikes makes some of the nicest pint-sized bikes around, and their Pro series is particularly beautiful.  I was particularly enamored with the tiny Pro Cnoc 16 with its aluminum pedals and carbon fork. 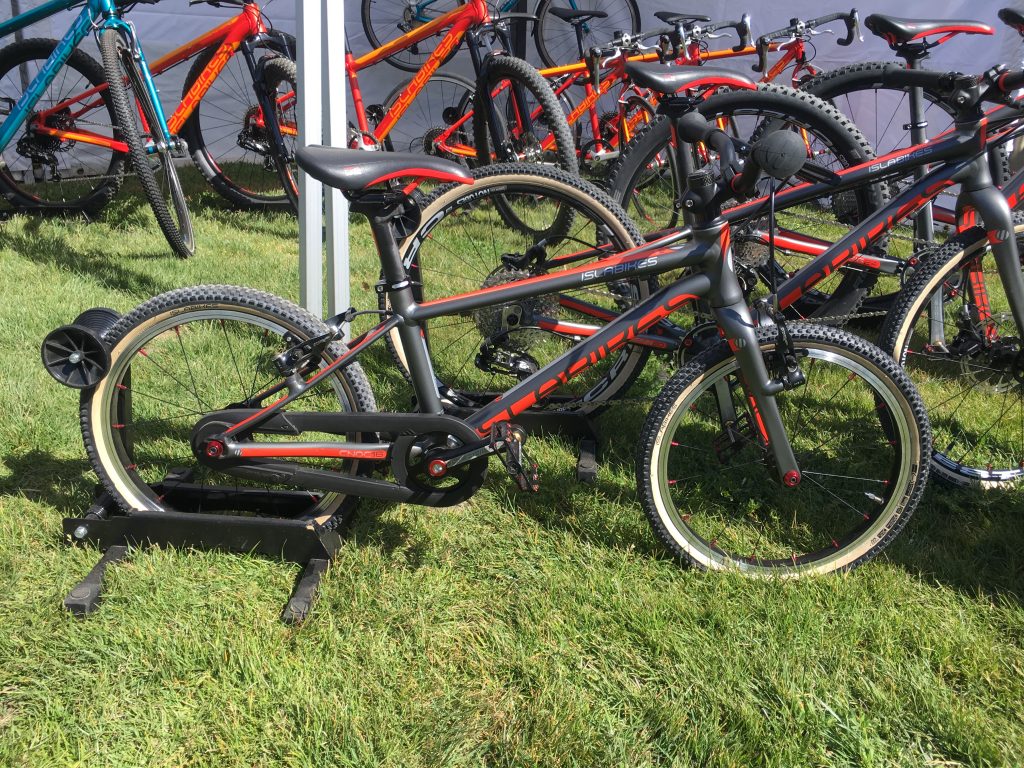 Finally, we’d be remiss if we didn’t mention that Trailcraft was at the show.  Rather embarrassingly, despite being at Sea Otter for 4 days, I never made it to their booth.  We were all so busy racing, watching dual slalom, and er, drinking beer, that we missed out on visiting the one booth I was most excited to see!  Nonetheless, we saw LOTS of kids riding Trailcraft bikes around the expo and on the trails and it is clear that Trailcraft is the brand to be reckoned with for larger-sized kids mountain bikes.