Stampede Bikes have long been a favorite of mine.  My son began “mountain biking” on his Stampede balance bike. (At that time, the company was called TykesBykes).  That balance bike went thru more abuse than a bicycle should ever have to endure.  He rode it on rocky trails, off jumps, over bridges, and left it in the rain.  And yet, it endured.

Given that background, my hopes were high for the Stampede Sprinter 16, the company’s 16” pedal bike designed for kids ages 4 to 6.  Fortunately, my expectations were met.  The Sprinter 16 is a capable, quality kids bicycle at a fraction of the cost of most kids-specific bike brands.  If you are looking for a superior 16” bike but are on a budget, the Stampede Sprinter 16 should be your top choice. 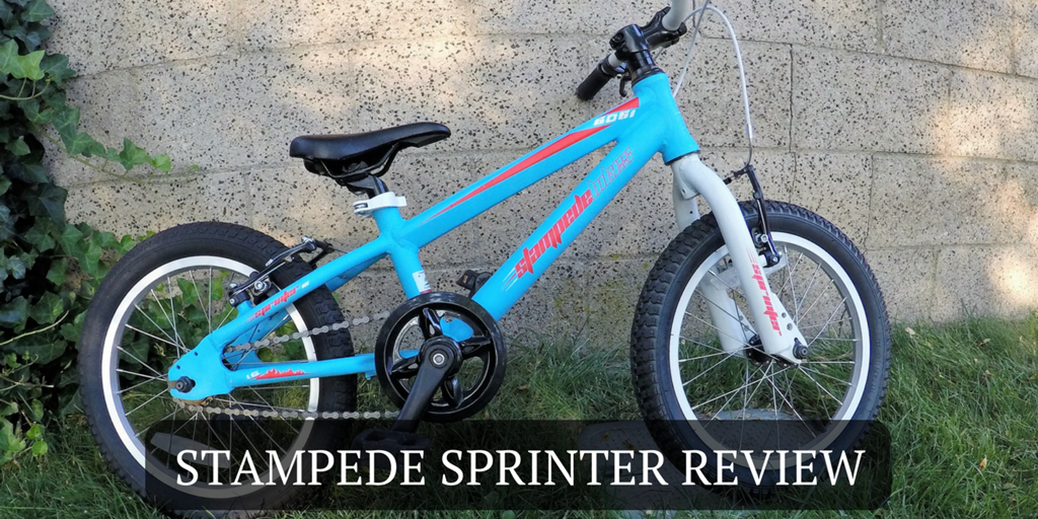 Price and Where to Buy:

I have so many parents read my Woom or Islabikes reviews, and then write me: “I would loooooove to get my child a Woom, BUT there’s no way we can afford that.”  And then I promptly tell them to check out Stampede.  Indeed, the Stampede bikes are my go-to budget option for parents who still want a high-quality bike.  At $250, the Stampede Sprinter 16 is not a CHEAP bike, but it is the best bang for your buck for cost-conscious parents. 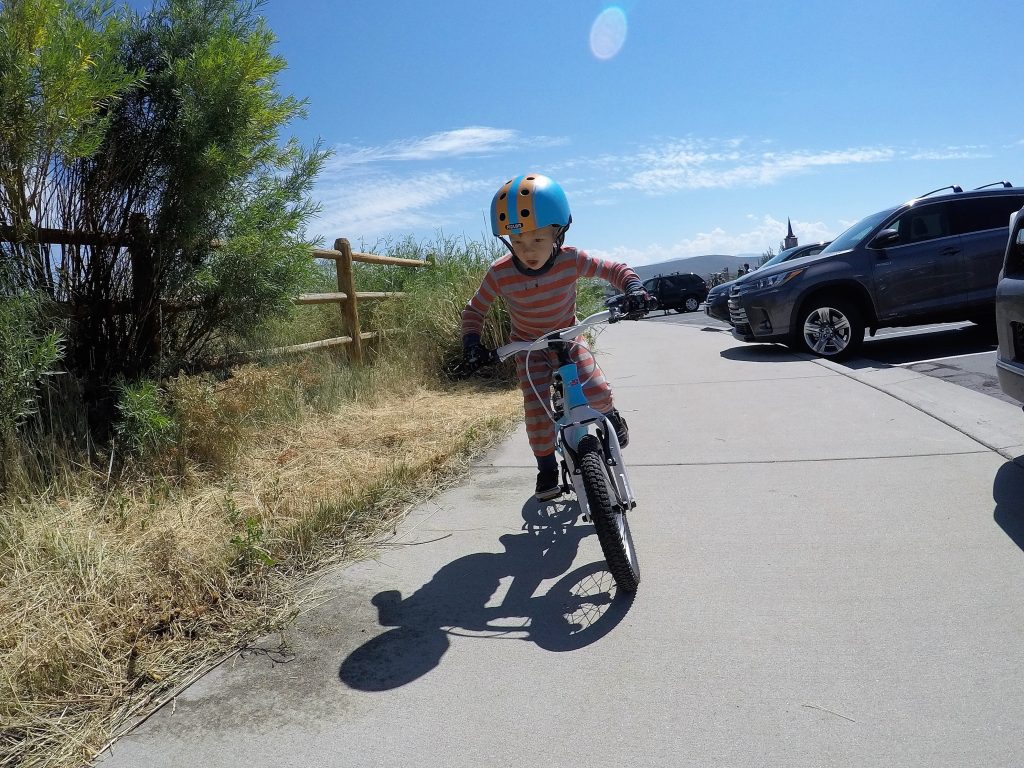 The Stampede Sprinter 16 is notably missing the brand-name components that some more expensive 16” bikes have—Tektro brakes, Kenda tires.  Don’t let that fool you—the components on the Sprinter may be no-name but they are quality.

As mentioned above, the brake levers are easy-reach, easy-pull.  The medium-tread tires hit that sweet spot where they work well both on- and off-road.  Other things worth mentioning are the sealed bearing hubs and bottom bracket, a quick-release seatpost, and locking grips. There is no doubt about it – Stampede has managed to build-up a bike with quality components at a budget price.

My favorite thing about the Stampede Sprinter 16 is the extra-wide handlebars.  As an adult who has discovered the added performance that comes from wide handlebars, I was thrilled to see this concept on a child’s bike.  Biking to dinner one night, I noticed my son being extra aggressive in his “tricks.”  He rode the Sprinter down stairs, zig-zagged in and out of an extra-large half-pipe gutter.  He commented multiple times, when asked about the bike, that it felt really “stable.”

This sense of stability comes in part I’m sure to the handlebars, but the frame geometry helps as well.  The 749mm wheelbase provides a highly stable bike that is easy and safe to ride.

The Stampede 16 is a little bit bigger than many other 16” bikes out there.  The minimum seat height is 22”.  That was too high for my 4.5 year old (who wears a 4T) pant, so we swapped out seatposts.  Once we did that, the bike fit him well.

Our just-turned 6 year old neighbor (who wears a 6T pant) was much more comfortable on the bike right out of the box.  Moral of the story is that this bike will best fit kids in 5T and 6T pants (but is modifiable for kids in 4T pants), and that you should always measure your child’s inseam and compare it to the minimum seat height of a bike before buying.  Not all 16” bikes are going to be the same! 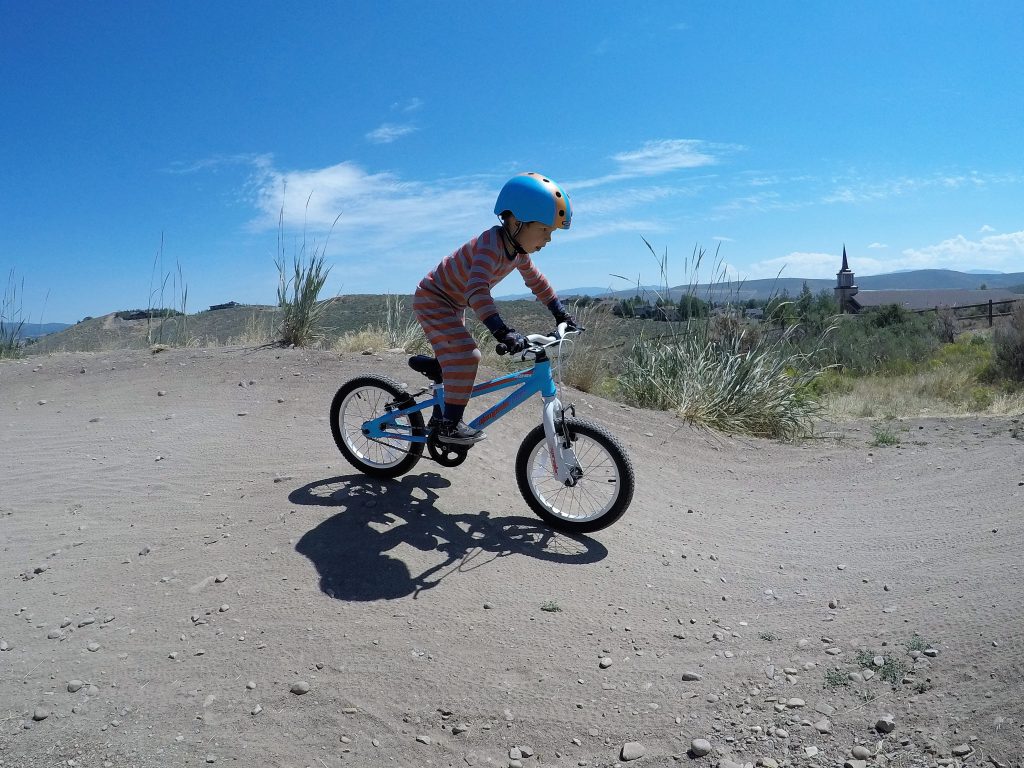 The Stampede Sprinter 16 tips the scales at a respectable 17.8 pounds.  Compare that to your typical big box store bike that will weigh 25 pounds–or more.  Choosing a lightweight bike for your child will help immensely with their enjoyment, confidence, and ability.

While the Sprinter is lighter than most kids’ bikes, compared to the much more expensive Woom 3 that weighs 12 pounds, my son could tell a significant difference in weight.  He commented several times that the Sprinter felt heavy.  That said, he’s also pretty skinny for his age.  The weight seemed to be a non-issue for our beefier 6 year-old tester who even managed to ride a couple wheelies with the Sprinter.

When deciding which bike to buy for your child, consider the build of your child.  If they are particularly lithe, you may want to splurge on a more expensive, lighter bike.  If not, the Stampede Sprinter is in the sweet spot between weight and price.

Most 16” bikes, unfortunately, come equipped with a coaster brake.  (If you’re not sure why you don’t want a coaster, read this article).  The Stampede Sprinter 16, on the other hand, comes standard with no coaster brake and dual handbrakes.  The brake levers are appropriately sized for young children and are easy to pull. 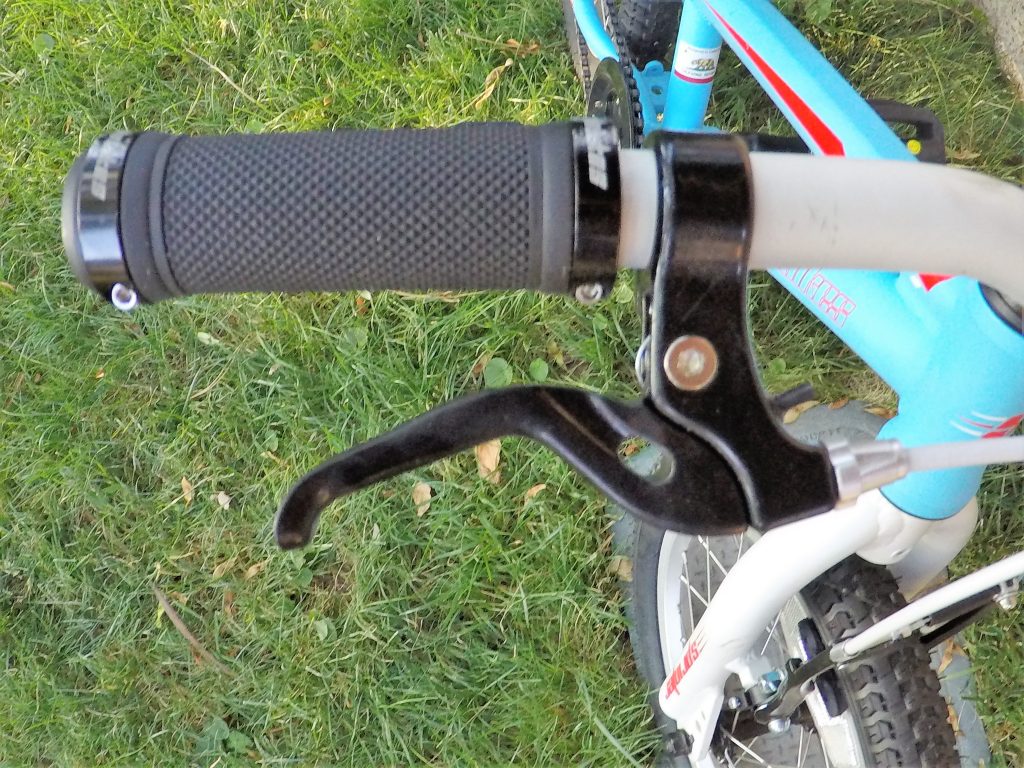 The Stampede Sprinter 16 has a gear ratio of 1.75 (28:16).  This ideal gearing means that the bike can be ridden fairly quickly on flat roads, but that kids can make it up hills as well.

The rear brake cable is routed thru the frame.  This keeps things clean and tidy, and also looks nice.  It’s another testament to the quality of the bike and that everything has been well-designed.

Where the Stampede Sprinter really shines is off-road.  It rocked the pump track and dirt jumps, and those wide handlebars I previously mentioned made all the difference.  If you are looking for a “mountain bike” for skills-riding, this little bike is a great option.

One thing worth noting on the Stampede Sprinter is the assembly.  The bike comes mostly assembled, but some final assembly is required.  As someone who puts together A LOT of bikes,  my husband had some complaints about the Sprinter.  The brakes weren’t setup at all and took quite a bit of adjustment time to keep them from sticking.  Overall, not a big deal, but something to keep in mind if you’re not a mechanical person.

Want to know how the Stampede Sprinter stacks up against other 16” bikes?  Here’s a comparison chart of our favorite 16″ bikes.  You’ll note, that the Stampede holds its own against significantly more expensive bicycles.

For $250, you can’t beat the Stampede Sprinter 16.  The extra-wide handlebars, freewheel, and quality components make the Sprinter 16 an enjoyable and easy-to-ride bike for kids ages 4 to 6.

Disclosure:  Like most of our reviews, we were provided product to test for this review, but received no monetary compensation.  Some links are affiliate links; meaning if you click thru and make a purchase, we receive a small commission.