Disclosure: The majority of links on this site are affiliate links and we earn from qualifying purchases.

The majority of the links on this site are affiliate links and we earn from qualifying purchases.

I get it: you want to buy your child (or grandchild) a bike and you want to do it without spending a ton of money.  That’s fair, and really, that’s what we all want, isn’t it?!  Unfortunately, buying a Walmart kids bike isn’t the way to do it.

Walmart kids bikes (and ALL Walmart bikes for that matter) are junk.  They are heavy, poorly designed, and will fall apart quickly.  That doesn’t mean you can’t buy a bike on a budget, it just means that there are better ways to do it.

Here are 5 reasons why you shouldn’t buy a Walmart kids bike, and 3 better ways to find a good quality bicycle that won’t break the bank.

(And for the record, we’re giving Walmart a hard time here, but this really applies to all big box stores.  Don’t buy a bike from a big box store.  Buy from a reputable local bike shop, bicycle non-profit, or directly from one of the better kids bike manufacturers).

In comparison, I weigh 125 pounds and ride a bike that weighs 25 pounds.  That means my bike weighs about 20% of my total body weight, compared to a heavy kids bike that might weigh 50% or more.

That’s a serious problem because kids don’t actually have that much muscle mass and younger kids are still developing their gross motor skills.  A heavy bike makes it hard to learn to pedal and ride, and once kids have mastered pedaling, it can make it so they tire quickly.  Don’t expect a child on a heavy bike to ride much further than around the block.

When I’m helping parents choose the best bike for their child, I usually tell them to buy the lightest bike that they can afford.  In my opinion, weight should be the #1 thing you look for when buying a kids bike.  Lighter bikes make it easier for kids to learn how to ride.  Lighter bikes are also easier to handle and maneuver making them safer, and are easier to ride longer distances.

That said, you also can’t just look at weight in isolation.  Some cheaper bikes are made with low-grade aluminum that’s light but that can easily bend or dent.  Other inferior bikes might be lighter simply because they lack components like hand brakes .

#2) They are Poorly Designed

In addition to weight, the geometry of a kids bike can make a huge difference in how easy a bike is to handle and ride.  Many of the better kids bike brands have invested a lot of time and money into the design of their bikes.

These top-end bikes tend to have a longer wheelbase (the distance from front wheel to rear wheel) which provides increased stability and ease of balance.  You’ll also find that they have narrower Q-factors (the distance between the pedals) than Walmart bikes which makes pedaling easier and more efficient.  Finally, the geometry of the handlebars can make a big difference.  To accommodate for the short wheelbase, poorly designed kids bikes tend to have high-rise BMX-style handlebars that actually reduce control and create a “twitchy” ride for young riders.

We have tested A bikes over the years and worked with enough kids and parents to have seen first-hand how much geometry can make.  A well-designed bike can make it easier to learn to ride, easier to ride further faster, and less likely to cause frustration.

The truth is that cheap bikes are usually made with cheap materials. Walmart bikes have lower grade aluminum frames that can bend and crack, have bearings that aren’t sealed and rust, and cheaper components that will break quickly.  While they might work well for a while, eventually they are going to start falling apart.  In the long run, this makes them a poor investment because they won’t last through as many children.

Higher-end kids bikes, while more expensive initially, can be handed down to two kids or three kids or even four kids.  They also have higher resale values, meaning you can often buy a bike, use it for a few years, and then list it on Craigslist and recoup half of your initial investment.  It also means that you can one of these used bikes and know that they still have plenty of life to offer.

#4)  They May Be Improperly Assembled and Potentially Unsafe

Walmart sells bikes but it is not a bike shop.  The folks assembling the bikes are not real bike mechanics and they do not have any certifications or professional training.

We’ve seen bikes sold at big box stores with forks installed backward, loose headsets, and other serious safety issues.  According to this article from BikeRoar:

Some of the biggest safety concerns discovered were loose handlebars and stems, which are an accident waiting to happen. Other problem areas were poorly adjusted brakes and loose . Issues like these have already led to serious injury and legal action.

If you do end up having an issue with the bike, you’re also unlikely to get much help.  The benefit of buying a bike from a local bike shop or one of the better kids bike manufacturers is the level of customer service and support you’ll receive post-purchase.

#5) They Have Stuff You Don’t Want On a Kids Bike (i.e. coaster brakes and training wheels)

Wait a minute, I hear you protesting, I DO want training wheels.  It’s how I learned, you say, and I turned out just fine.

Truth.  I learned on training wheels too and I happen to be a serious cyclist who rides my bike EVERY day.  That said, just because it’s the way that we learned as kids, doesn’t mean it’s the best way to learn to ride a bike.  The fact is that for 90% of kids, they are going to be better off learning to ride WITHOUT training wheels.

Instead of going straight to a pedal bike with training wheels, start your child on a balance bike OR start them on a pedal bike (sans training wheels) and remove the pedals.  By teaching a child to “scoot” on the bike first, they learn to balance without the added complexity of pedaling.  Then, when you add pedals to the mix, kids tend to learn to ride MUCH FASTER, with fewer crashes, and fewer tears.  This is why you’ll find that the better kids bike manufacturers simply don’t include training wheels on their bikes.  And yes, it is true that you can always remove the training wheels from a Walmart bike, BUT what you’ll also find is that most of these bikes have been designed to use with training wheels and the seat height is simply too high to use without.

The other thing you’ll discover on Walmart kids bikes is that they have coaster brakes rather than hand brakes.  We dislike this for 3 reasons: (1) coaster brakes are heavy, (2) coaster brakes can make learning to pedal frustrating, and (3) the lack of a hand brake keeps kids from learning good braking skills at a young age.

How to Find a GOOD Kids Bike

Let me be clear: just because I’m telling you not to buy a kids bike from Walmart doesn’t mean I’m a snob.  Like you, I have to figure out how to pay the electric bills and the doctors bills and the grocery bills and all that.  But I also believe that you a kids bike from Walmart is basically wasting your money.  Because the thing WILL fall apart, you won’t be able to re-sell it for more than a couple of bucks, and ultimately you can do better.

Here are a couple of things I would try before resorting to a bike from a big box store.

#1) Look for a used bike on Craiglist or

Buying a high-quality kids bike second-hand is about the best decision you can make.  A really good kids bike will last through multiple children, and depending on the area you live in might not be that hard to find.  The key is to know which bike brands you should be looking for before you start your search.  One of my friends found a Cleary Gecko for $100 on Craigslist, and turned around and sold it a year and a half later for $100.  That means the bike ended up costing her ZERO DOLLARS.

#2) Reach Out to Local Non-Profits and Bicycle Collectives

In Salt Lake City, we have an awesome organization called the Bicycle Collective.  They take donated bikes, fix them up, and then sell them for cheap.  To be honest, some of the bikes are cheap big box store bikes, but others are really decent bikes for the big bike manufacturers (Trek, Specialized, etc).

If you live in a big city, chances are that there is a similar organization in your area.  In smaller towns, makes some phone calls to your local bike shops.  Some have trade-in programs where people can trade in used kids bikes for new ones.  This is a great way to snag a high-quality used kids bike for a killer price.

I know a top-end kids bike isn’t a financial priority (or a financial ) for everyone.  That said, if you do have the ability to raise your budget, it makes sense to do it.  Like many things in life, spending a bit more on a kids bike equates to a much nicer product.  Not only does a nicer bike create a more enjoyable product for your child it buys you a bike that will last longer and have a higher resale value when your kiddo is done with it.

Learn More About How To Buy a Good Kids Bike

Save yourself money, time, and frustration by doing your research before buying a bike for your child. 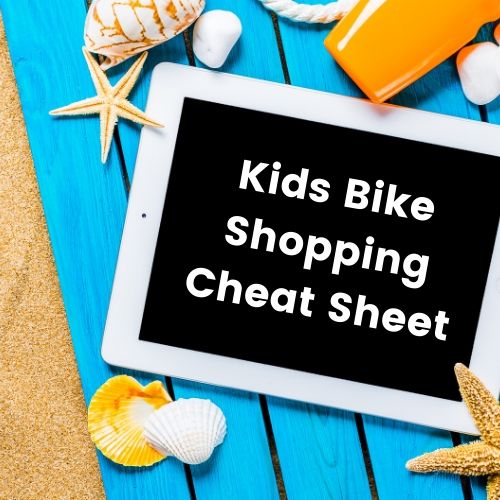 Don’t waste your time or money by choosing the wrong bike!!!